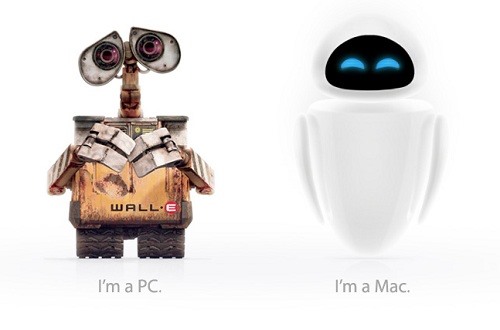 Just to get a feel for what you folks are using, let's see a show of hands. Mac? Windows? Linux? Something else?

PC, both here and at work.

Both. My view is you should always use the right tool for the job.

I'm a Mac, mainly because it's easier to organize and less clumsy. But to each his own.

Hey Justin, I also do use a mac as it is so much easy to use and well organized the features given in mac can come in handy for many scenarios. I have known some great tricks of mac from facebook it helps a lot in clumsy situation, you can also check that out if needed.

I'm a PC girl all the way, but I don't hate on Mac folks. I think there's room enough in the electronic universe for all of us. And like Bryan said, it's all about the right tool for the job. If I were a graphic designer or a visual artist, I'd be all about the Macs. I use my desktop primarily for gaming, and so far, I haven't seen a Mac that can do what my custom-built baby can. It's all a matter of what you need it for.

And I can get around iPads and iPhones well enough, but I haven't picked one up myself yet.

You said "Operating System" roll call right? Until recently I did all email using Mozilla running under the QNX operating system running on a PC (Pentium II 722MHz) and everything else by rebooting into Windows 2000 on the same machine. Then I bought a new machine with Windows Vista loaded, so now I do everything under Vista. If I get PlayBook I'd be using QNX again!

Right now I'm on my husband's laptop which is running OpenSuse (since he works for them). At home I use a Mac mini.

toastykitten, Funnily enough, same reason for me, I used to work for QNX. (Plus their OS architecture is a thing of beauty.)

Cool! Can you tell us what specifically is great about QNX? I've never seen it, so I have no idea what sets it apart from other OSes. Or that it even existed until you mentioned it!

toastykitten, The very heart of the QNX OS is the microkernel. This is a chunk of code that does very few things compared to most other OSes: message passing, timing, scheduling, interrupt handler calling. Compare this to a monolithic kernel like Linux which has handles in the kernel for all sorts of additional things: file I/O, networking, serial I/O, ...

Think of the kernel as the central switchboard. When hardware wants to wake up software or when the hardware timer ticks, it's the kernel that runs first and then wakes up something else. The problem with a monolithic kernel is that if the kernel is busy doing something when the timer ticks, then whatever time critical thing that wants to run as a result will just have to wait until the kernel is finished whatever else it's doing first. In a microkernel that has a minimum of duties, the kernel won't take long in getting around to that timer request, and in fact a maximum delay can be computed. In a monolithic kernel that could be in the middle of some network driver code, the timer will just have to wait for an unknown delay period.

So the QNX microkernel can handle time critical tasks, whether that be hardware requests or timers.

But that's not the most cool part. In the first paragraph above I mentioned that the kernel also handles message passing. The message passing model most used, there are more than one available, is that the sender Sends a message, and the receiver Receives it. The sender then wait, consuming no CPU, until the receiver Replies. This synchronous (synchronized) message passing model makes for very elegant code, as well as predictable compare to asynchronous models. Also one of the mechanisms for having the sender find the receiver in the first place is assumely simple to code, compared to say, TCP/IP and sockets. Maybe you gotta be a programmer to really appreciate the simplicity, or to at least have experienced the alternative.

So the elegant kernel design and the elegant message passing mechanism make it something to respect and a pleasure to work with. Kinda like how a physicist admires an elegant model.

Of course, QNX also has all the UNIX/POSIX/Linux programming interfaces so you can program the other ways too and for portability and other reasons you usually do. But underneath it's the still QNX microkernel and a lot of the other interfaces are written on top of the synchronous message passing.

Wow Steven, that's awesome. I didn't understand all of it, but luckily I have a husband who also works on kernel stuff, who's great at explaining nerdy stuff to me. His main project is the ocsf2 cluster file system if you're interested.

I suppose I'm a PC guy although that generally equals Windows user.  I'm not one of those.

You know, a PC isn't an operating system, it is a computer hardware architecture.  It will run a lot of different OS-s.  My (current) choice is Debian Linux.

And Cybe's right, "PC" just refers to the way the machine is put together (well, when you get right down to it, a Mac is just a particular brand of PC, but that's really splitting hairs). I probably should have phrased my original question differently. I think the average Joe instantly equates PCs with Windows, but yes, you can run anything you fancy on a PC. Macs are only supposed to use the Mac OS, which you're not technically allowed to run on any other type of machine.

Technically, (and these days), Macs can run some Linux distributions. PCs can run Windows, Linux or Mac OS and almost any OS can be run on most any architecture in a virtual machine.  The lines between both architectures and operating systems are becoming more and more blurred daily.   ...and that's a good thing.

Absolutely. I'm of the opinion that folks should be able to do whatever they like with their gadgets. It's your machine, after all. Tweak it, hack it, run whatever you want on it.

And I didn't know that Macs are capable of running Linux. That's super cool.

I use Vista and Ubuntu ever since my Hard disk kept failing on me. Good thing they replaced it. Now I use ubuntu more frequently than vista.  On another note, anybody here have experienced using filesonic? Just signed up for a year's worth. I wanna know if it's a good file sharing server. I'm planning to post my remastered ubuntu lucid  ( mainly as a solution for laptops with nvdia ). Installable thru dvd or usb with pre-installed apps. About 3.5GB though broken into 5 parts.

And I didn't know that Macs are capable of running Linux. That's super cool.

Y'know, Linux is one of those things that has been on my "Learn More About This Stuff" list for quite some time. Is there a particular site or resource that you'd recommend as a starting point for learning the basics?

There are a lot of great sites out there for learning about Linux. I'm no programmer, but I've found that Ubuntu's pretty easy to use straight out of the box.

For books, I'd recommend perusing any of the O'Reilly manuals. For sites, LinuxChix has online courses that you can put yourself through.

Another option is to check to see if there's a local Linux Users Group (LUG) in your area. They often do things like InstallFests and introducing people to Linux and provide networking opportunities.

Thanks, TK! I'll definitely be giving LinuxChix a spin. :)

I have a remastered Ubuntu 10.04. It uses the grub kernel from Karmic Koala so it's able to boot natively on my Suzuki Laptop (Uses Nvdia Graphics). A 1GB version I split using winrar ISO part 1, ISO part 2. My Installable version is about 3.5GB (post a reply and i'll give you a link). Give it a try!

The Linux kernel(s) are called just that; kernels.  They have number associated with them to distinguish one from another.

Hi, I use a mac personally cause it is better organized and much more easy to use according to my needs. In the case of Linux, there is a huge number of sites to learn about that but Facebook is much easy for me to understand.

I really appreciate your informative post. But I had a problm=em with my windows 10 operating system when I updated the system and wanted to print a document at that time Canon Printer Error 5200 pop-up notification shown on my system.